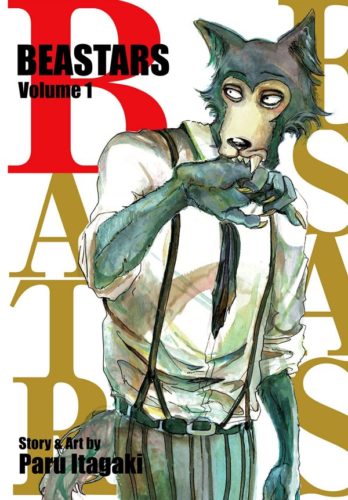 Animal tales are often considered the purview of kids and fun fantasy. However, sometimes you’ll get one like Orwell’s Animal Farm, which is more a commentary about human society. Beastars also falls into that category, and you can read on for my review of Volume 1. (For reviews of other volumes, click here.)

One night at Cherryton Academy, an herbivore student is brutally murdered. Among the members of the Drama Club, the herbivores’ suspicions naturally turn to their carnivore classmates… The prime suspect? Wolf Legoshi. But he wouldn’t hurt a fly. Or would he? Will dwarf rabbit Haru bring out the beast in him? Or are his feelings for her something else?

Cherrystone Academy is a school where herbivore and carnivore animals attend class side-by-side in peace. At least, until alpaca student and drama club star Tem is found murdered on campus. Herbivores immediately suspect their carnivore classmates, and the one who draws the most suspicion is drama club stagehand Legoshi the wolf. But even though Legoshi’s big, he’s far from bad; he’s a law-abiding citizen if there ever was one. Unfortunately, as the drama club struggles to prepare their next performance in the wake of Tem’s death, Legoshi gets dragged into one conflict after another, causing a savage bloodlust to stir in the mild-mannered wolf’s veins.

The mangaka mentions in the afterword, “This is a animal manga that is a human drama.” And it is. The cast are animals who get categorized by and retain key traits of their species, but they all walk on two legs, have hands with opposable thumbs, speak a common language, and wear school uniforms. Within the student body, you can identify the school bullies, elitist machinator, jealous wannabe, and social outcast. Our main character Legoshi is the epitome the scary-looking guy who’s completely misunderstood. After all, he literally is a big wolf, and classmates assume he’s bad to boot.

The story begins with Tem’s murder, and Chapter 1 is dedicated to an herbivore’s perspective of Legoshi’s suspicious actions the next day. However, rather than turning into a murder mystery, the plot focus shifts to the impact on Tem’s club. The drama club kids aren’t playing detective; they’re trying to put on a theater production, and they have to find a replacement for Tem. Thus we have an engaging mix of school and club politics on top of the carnivore/herbivore tension, and unfortunately for Legoshi, he gets unwillingly dragged into it all.

Cherrystone Academy is essentially an allegory for a heterogeneous community, and the rules that maintain peace between the animals represent the social standards that maintain order between varied people groups. As in our world, individuals at Cherrystone must keep their personal urges in check for the greater good. And just as circumstances in this world can drive some to give way to their baser urges, the antagonism of Legoshi’s classmates causes a predatory instinct to erupt within the young wolf, and his struggle to master that hitherto unknown bloodthirst looks like it’ll be an intriguing one.

The artwork, I should mention, is not this series’ strong suit. In the spectrum of manga art, this definitely falls in the ”rough” range. The style is scribbly and includes a lot of hatch marks. The animals are cartoony rather than cute or elegant, and certain species, especially smaller mammals, are difficult to tell apart.

Beastars begins with a murder but winds up relating the internal conflict that results when an individual must suppress his innate nature to be accepted by society. Legoshi is a likable main character, and it is surprisingly easy to sympathize with the misunderstood wolf as he deals with distrustful classmates and a manipulative club officer. The premise of carnivores wanting to live in peace with herbivore comrades and choosing to subsist on bean-based burgers is a little farfetched though.