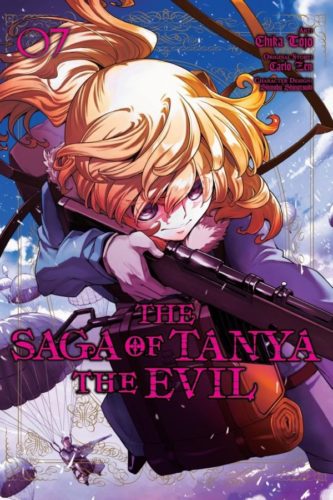 The Saga of Tanya the Evil anime was a surprise favorite for me in 2017. With a title like that, I was almost too scared to give it a try, but conniving little Tanya turned out to be nothing like I anticipated. Yen Press has released Volume 07 of the manga adaption, and you can read on for the review. (For my reviews of other Tanya the Evil works, click here.)

With undeniable wit and charisma, Tanya manages to charm her way into the warmth of the office…not. When an order for a military march launches the dumbfounded Degurechaff into the freezing depths of winter, fluffy pillows and five course meals are the last thing on her mind…That is, until the Major discovers another tempting course of action…

I commented in my review of Volume 6 that Being X has been absent a while. Well, apparently he doesn’t want us to forget him because he pops in at the opening of Volume 7. Although the chapter is titled “Norden VI,” nearly half of it is Tanya’s reflections on her previous world and the philosophies and events that formed her character. In the midst of this walk down memory lane, Being X interrupts with images of a life the Japanese salaryman could’ve had. The interaction between divine and mortal is brief, but in addition to the usual spite and venom that reaffirms our main character’s disgust toward his creator, we also see a rare instant of vulnerability.

Then it’s back to Norden and the winter offensive so hotly debated in the previous volume. Tanya calculated that such a push would only wear down the Empire’s already ragged resources, but General Staff is treating the Northern Army’s offense as part of a larger plan to subdue the Regadonia Alliance. Tanya piecing together the top-secret attack through her conversation with von Rudersdorf is covered in all three incarnations of this story, and as usual, the manga provides the clearest version. Whereas the anime breezes through the massive pincer plan too quickly and the novel’s narrative is a bit hard to comprehend, the manga’s depiction of the von Rudersdorf interchange followed by a cartoon outline spells out the operation in understandable terms. Granted, the outline is somewhat dense, but that’s only because so many elements are involved in the multipronged attack.

Having explained what the imperial forces are about to do, preparing to execute it is the next order of business. Thus far, we’ve only seen Army forces at work, and in “Norden VII” we get a first glimpse of the Navy. Despite the tension of the impending fight, these scenes are good for giggles. In addition to the usual contrast between Tanya’s train of thought and those of the adults around her, Tojo-sensei has fun with the character designs of the imperial sailors. (Battleship Yamato anyone?)

The volume concludes with the start of the strike on Os. While the illustrations deliver excitement with clarity per usual, they also included an artistic choice that made me really uncomfortable.  Not to say that getting one’s clothes shredded is an impossibility in combat, but it just seems wrong when Tanya’s the only one fighting naked in a zone filled almost entirely with adult men. I really wish Tojo-sensei had let her stay clothed or leveled the field by making everyone naked.

General Staff chooses to make a winter offensive on Norden! But before the fight begins, the narrative delves into the strategic nitty gritty of what the higher ups really have in mind for this seemingly foolish attack. While we don’t get any combat scenes till the very end of the volume, the lead-up to the fighting plus a glimpse into Tanya’s previous life keeps things engaging.

One response to “Manga Review: Saga of Tanya the Evil Vol. #07”