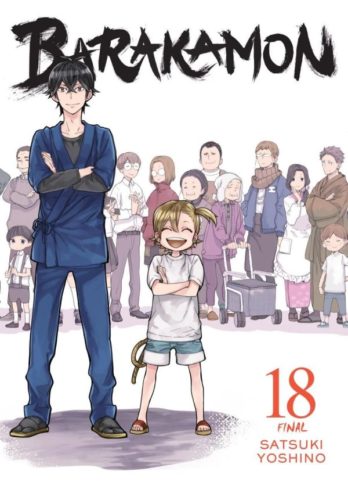 The contrast between city and rural life has been a source of entertainment since the time of Aesop’s fables. It remains a popular subject in manga and anime today, and joining the ranks of Silver Nina, Non Non Biyori, and Silver Spoon is Yen Press’ series Barakamon. Read on for my review of Volume 18! (For my reviews of previous volumes, click here.)

It’s been a year since Handa arrived on the island, and a lot has changed for the residents of Nanatsutake Village. Hiroshi’s in Tokyo, Miwa and her friends have graduation on their minds, and Naru and her classmates are going into their second year of elementary school. With everyone looking to the future, the time to say goodbye approaches in the final volume of Barakamon.

It’s been a year since Handa arrived at the island, and this final installment notes how the characters have moved forward over that time. Some progressions are mundane. The kids advance another grade in school but are otherwise exactly the same. The notable exception is Tama, who achieves a significant milestone when her work gets published as an honorable mention in a manga contest. The subject of that work, however, is a massive detour from her usual genre and turns into a bit of a running joke.

Unlike Tama, who’s been diligently working at her mangaka dream, Miwa has been more a giant goof-off, but in this final volume, Miwa decides to become a brewer. Because she’s the flaky type, I took it as a joke at first, but apparently she’s serious. (Or as serious as Miwa can get.) I found it rather sudden, nearly as sudden as her dad shutting down his store to take a job on Yuuichirou’s ship. Overall, the timing feels odd because there wasn’t foreshadowing for either development, and because the series is ending, we don’t actually get to see Miwa set out on the path of the brewer or how she adjusts to life without her dad at home.

An arc that actually achieves a kind of resolution, however, is the relationship between Naru and her dad. Theirs is definitely not the typical parent-child dynamic, but it starts to shift in that direction with some help from Miwa and Handa. Unfortunately, it is not entirely satisfying because we never get any information on Naru’s mom, nor does Naru show any interest in learning about her.

As for Handa, this final installment has him growing into his calligraphy teacher role although he remains as immature as his students. This is evidenced by the final chapter in which the now second-grade kids designate Handa their substitute first-grader at the school’s first years welcome party. While the villagers have become accustomed to Handa and he’s found a way to support himself, he hasn’t changed that much.

The series concludes! It doesn’t exactly go out with a whimper, but it’s not a strong finish. Some loose ends get wrapped up, like Naru’s relationship with her dad, but Yoshino-sensei oddly chooses to introduce a couple new elements with the story about to close. As for our main character Handa, he merely exhibits his usual immature behavior for the last chapters.