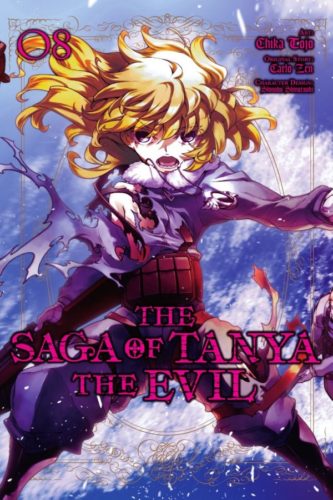 The Saga of Tanya the Evil anime was a surprise favorite for me in 2017. With a title like that, I was almost too scared to give it a try, but conniving little Tanya turned out to be nothing like I anticipated. Yen Press has released Volume 08 of the manga adaption, and you can read on for the review. (For my reviews of other Tanya the Evil works, click here.)

This volume, like Volume 7, kicks off with a glimpse of the divine. However, rather than an interaction with humans, the divine forces discuss among themselves the most effective means to manipulate humanity. These characters are depicted as a rather jarring collection of religious figures. Fortunately, the interlude is brief, and we quickly return to Tanya’s battle against Colonel Sue’s aerial unit.

Unlike the anime, where Tanya kills the Colonel without much trouble, he puts up a serious fight, and Tanya only survives due to luck and Imperial reinforcements (who thankfully are considerate enough to show up with a spare coat for the naked Major). From the Tanya/Sue dogfight, the action zooms out to the positions of the 203rd unit. Then it takes a further step back to a macro level perspective for the Imperial Northern Sea Fleet’s invasion and the tremendous damage they dish out to the Alliance troops. Overall, Tojo-sensei does an excellent job conveying the fight’s progression and the chaos wreaked upon Os.

Having survived the Battle of Osfjord, Anson Sue handily provides a window into two groups within the defeated country: the ordinary citizenry and the politicians. The loss of their homeland is inevitable, so the Colonel arranges for his family to escape the country, and we witness his touching farewell to his wife and daughter Mary. Mary doesn’t do much but smile and look charming, but quite a few pages are devoted to her introduction. Oddly, even though the Entente Alliance is a northern country and it is December, she frolics in a meadow in a spring dress. Even odder, she’s half her mother’s height, which makes her look twelve at most, but she’s drawn with a C-cup bust. That aside, the manga shows the means by which Mary obtains her submachine gun present to her father, a detail that was not included in the anime or novel.

As for Colonel Sue, he’s stuck with carrying out his defeated government’s plans to continue the fight against the Empire. With the enemy closing in, the Entente politicians desperately reach out to the Albion Commonwealth. The two countries scheme to smuggle out a high-level Entente official for the purpose of establishing a government in exile, and Colonel Sue is assigned to accompany that official out. Although it’s somewhat dense, the diagram that explains the Alliance and Commonwealth plan to get around the Imperial naval blockade is super helpful. By the way, this arc was part of the light novel but not the anime, and I look forward to seeing Tojo-sensei’s visual interpretation of it.

Aerial dogfights, battleship salvos, and marine landings, oh my! Military buffs will get their fill of action in the conclusion of the attack on the Osfjord. Then the cloak and dagger types will get their turn as the Alliance schemes with the Commonwealth to smuggle out a high level official to form a government in exile. The focus is less on Tanya and more on the plight of her defeated enemy, but the narrative remains a compelling one.