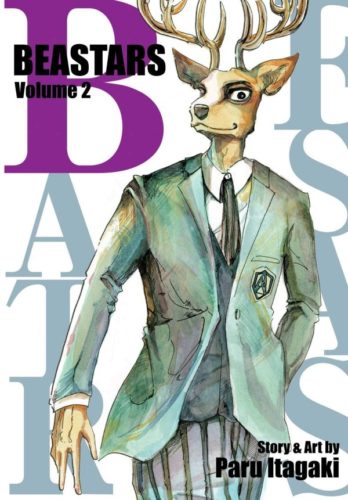 Animal tales are often considered the purview of kids and fun fantasy. However, sometimes you’ll get one like Orwell’s Animal Farm, which is more a commentary about human society. Beastars also falls into that category, and you can read on for my review of Volume 2. (For reviews of other volumes, click here.)

Dwarf rabbit Haru’s odd behavior causes wolf Legoshi to flee. He then learns that the Drama Club recruits new students with inner demons. What does their club president, red deer Louis, wrestle with? Before Legoshi can figure it out, Louis pressures him to face not only his own weaknesses but also his strengths. Legoshi’s character is truly put to the test when his onstage fight choreography with Bengal tiger Bill turns all too real. Has someone broken the school rules? And could the battle between Legoshi and Bill involve…rabbits?

Volume 1 ends with Legoshi unexpectedly encountering the rabbit he attacked during an errand for the Drama Club. In Volume 2, that scene progresses but not in the way you’d expect. Despite the injury to her arm, Haru doesn’t remember Legoshi’s attack. As such, she treats him like any other male student. As for Legoshi, he’s completely unaware of Haru’s reputation. So when Haru assumes he wants what every boy wants from her, it *ahem* comes as a shock to the innocent young wolf.

Haru’s upfront manner also took me by surprise. I had assumed the rumors about her were unfounded, that she was being unfairly slandered by that jealous harlequin rabbit. Judging from her interaction with Legoshi and a candid conversation between male students, she has slept with a number of herbivore guys and had no hesitation offering herself to a carnivore like Legoshi. I also got thrown off because I thought intimate relationships stayed within species, but I guess not? Anyway, although Haru’s been branded a slut, Legoshi sees her as a nice girl, which complicates his already complicated emotions about her.

Then the focus shifts back to the Drama Club, which is getting ready for its first performance of the year. Amid their frantic preparations, we learn that only beasts that have been deeply traumatized are invited to join that club. It is a strange criteria, and we’ve yet to meet to the advisor who supposedly scouts out these scarred kids. However, the information initiates speculation about what dark secret the seemingly perfect Louis could harbor.

The perspective then actually switches to Louis’ as he takes the stage for the play’s opening performance. We know he’s good at putting up an act on multiple levels. Now we get his unfiltered thoughts on his fellow students and circumstances as his plans go awry.

It’s pretty much a given that Louis’ hidden injury would eventually get out. The surprising twist is that Legoshi gets recruited to take the role vacated by Louis’ understudy Bill. Bill the Tiger is Legoshi’s polar opposite, and their different personalities make for gripping conflict on and off stage. It does get a little over the top when Louis inserts himself between the two clashing carnivores, but other than that, it demonstrates how tenuous the school’s herbivore/carnivore peace is.

Things get awkward between Legoshi and the rabbit he nearly ate–but not the way you’d expect. Similarly, Louis’ injury forces last-minute changes in the school play, but not the way you’d expect. Itagaki-sensei does an excellent job keeping the plot interesting and heightening the tension at Academy with the emotional baggage of the main characters.