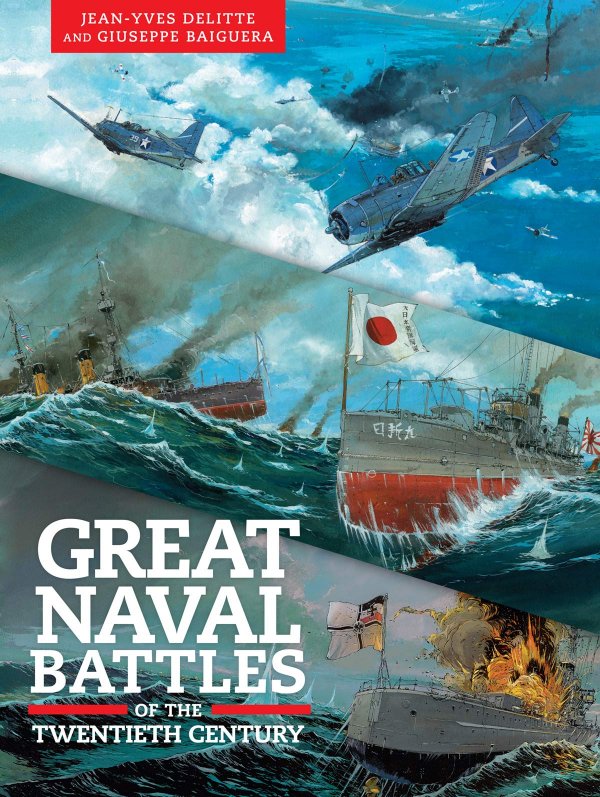 I never had much interest in war narratives until I came across Tanya the Evil. It’s a completely fictional isekai, but its war nerd creator did such a wonderful job dramatizing the varied aspects of military conflict that it completely hooked me. Since then, I’ve checked off Tom Hanks’s Greyhound and the Ken Burns documentary The War from my viewing list. As such, I was eager to see what sort of narrative Great Naval Battles of the Twentieth Century would present. Read on for the review!

In the history of civilizations, sea power has always played a preponderant role. This symbol of a nation’s scientific and military genius has very often been the deciding factor during major conflicts, putting the names of several clashes down into legend. With this collection, Jean-Yves Delitte and Giuseppe Baiguera plunge into the heart of three of the twentieth century’s greatest naval battles.

This graphic novel, which was written by Delitte, a member of France’s Academy of Arts and Sciences of the Sea, contains three fictionalized accounts of the Battles of Tsushima, Jutland, and Midway, plus a section of “Battle Histories” at the end to provide context for each of the stories. Unfortunately, the title is misleading. I expected a story like Greyhound, where the majority of the narrative is focused on actual battle/engagement. Instead, “Tsushima” begins six months before the Battle of Tsushima, “Jutland” begins a year before the Battle of Jutland, and “Midway” begins with the immediate aftermath of Pearl Harbor. In terms of page allocation, only five pages of the forty-six page “Tsushima,” seventeen pages of the forty-six page “Jutland,” and ten pages of the fifty-page “Midway” present the battles for which these stories are named.

Instead, the focus is the circumstances leading up to the naval battles as well as the lives of rank-and-file sailors and pilots, who, for the most part, have limited knowledge of what’s happening. While this does provide broader scope and gives readers characters to sympathize with, it also means the view of the actual fights are very narrow. While there are stunning illustrations of ships cruising and exchanging fire, there’s almost nothing about the overall flow of these three naval battles. It would be more accurate to title the book: Factors Leading up to the Great Naval Battles of the Twentieth Century.

Content aside, this is a wonderfully illustrated book for a military history text, but it is a very slow read for a graphic novel. Delitte relies almost exclusively on character dialogue to relay information about what’s happening politically and strategically, so conversations end up dense and info dumpy. And even though the narrative constantly refers to different geographical locations, no maps are included, and incorporating maps into the illustrations definitely would’ve helped from a storytelling and educational perspective.

Finally, this might be because the writer is French, but the book definitely has a Eurocentric bent to it, “Tsushima” especially. “Jutland” and “Midway” have primary characters representing both opposing nations, but in “Tsushima,” the main characters are the sailors on a Russian ship and military observers from Britain and France; there’s no Japanese perspective at all. Moreover, the entire lead up to the Battle of Tsushima seems like a bunch of excuses for why the Russians lost to the Japanese. Also, while the English and Germans toss a few slurs against each other in “Jutland,” an avalanche of Asian/Japanese slurs are used by Russians and Americans in “Tsushima” and “Midway,” but the Japanese don’t use any equivalent Western slurs against them. Not that I’m a fan of slurs, but if a writer is going to use insults for flavor or accuracy, those of both sides should be presented.

It’s not so much Great Naval Battles as it is Politics and Prelude to Great Naval Battles. This graphic novel does deliver quite a bit of information with beautifully drawn and colored illustrations, but it’s less about tactical maneuvers and salvos and more about providing context for the ultimate outcomes of the clashes. Also despite the fact that Japan contends in two of these engagements, the narrative is very much lacking in terms of an Asian perspective on events.