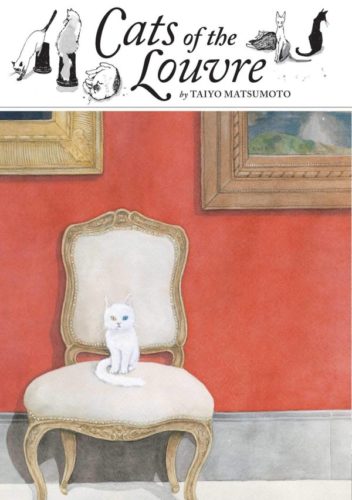 Cats and cat-people are often used to bring an element of cuteness or fun to a manga. In Cats of the Louvre, Taiyo Matsumoto features felines with a rather different vibe. Read on for the review.

The world-renowned Louvre museum in Paris contains more than just the most famous works of art in history. At night, within its darkened galleries, an unseen and surreal world comes alive—a world witnessed only by the small family of cats that lives in the attic. Until now…

From the title, I thought this would be a collection of stories taken from the perspective of different Parisian cats. Turns out it’s just one story focused on one cat, but while the setting involves the actual building and artwork of the Louvre Museum, the tone is decidedly fantastical.

Old Marcel is a long time watchman at the Louvre. Having walked its halls for decades, he knows everything about it, including the secret community of cats in the museum attic. Most of them are ordinary animals who know to hide from the crowds below. However, little Snowbebe is so drawn by the artwork he can’t help from venturing downstairs.

If I had to describe this book in one word, it would be artsy. Partly because it’s set in the Louvre, and the mangaka has gone through tremendous effort to incorporate numerous aspects of the museum into the story. Partly because the plot centers on those who can hear “the voice of the paintings” and escape into the artwork.

And by escaping, I mean literally that. The souls with that talent have delicate temperaments. Unable to thrive and connect in the real world, they step through the picture frame into the scenes depicted within… and that’s about it.

Because the ones going into the paintings have no greater purpose than to enjoy the worlds they enter, the main tension stems from the trouble their behavior causes those around them. Oh, and the ability isn’t limited to humans. Thus we have Snowbebe’s trips to the museum’s display areas causing problems and arguments within the attic cat community. Unfortunately, Snowbebe’s spacey, self-absorbed personality makes it difficult to sympathize with him.

On the human side, we have Marcel trying to locate a sister who disappeared decades ago. However, he’s kind of gloomy and weird (who harbors eight cats in an unventilated attic?!) and Cecile, the tour guide who lends him assistance, is depressing too. The story’s not dark, but the cast’s personalities aren’t the most uplifting.

Speaking of cast, much of the cast are cats. When they interact with humans, they meow and look like cats. When they are alone, they take on anthropomorphic forms and exchange dialogue. Their behavior, however, is decidedly catlike. They spout random things, and when a spider that Snowbebe knows dies, Snowbebe mourns, then he eats the spider.

Regarding illustrations, they have a rough, cartoonish feel. Character designs are neither cute nor elegant. Expressions often have a level of distortion. The anthropomorphized animals especially have a psychedelic quality. Rather than using screentones, the mangaka uses hatching, and lines are squiggly and uneven. Overall, the artwork has the look of a draft, not a final product.

The Louvre provides a grand setting for characters who transcend into artwork. However, it’s less of an exciting adventure into other dimensions and more of a gloomy investigation by the ordinary folk left behind. The art style is also lacking, and despite the fact that the story features famous art and architecture, the overall visual effect is underwhelming.