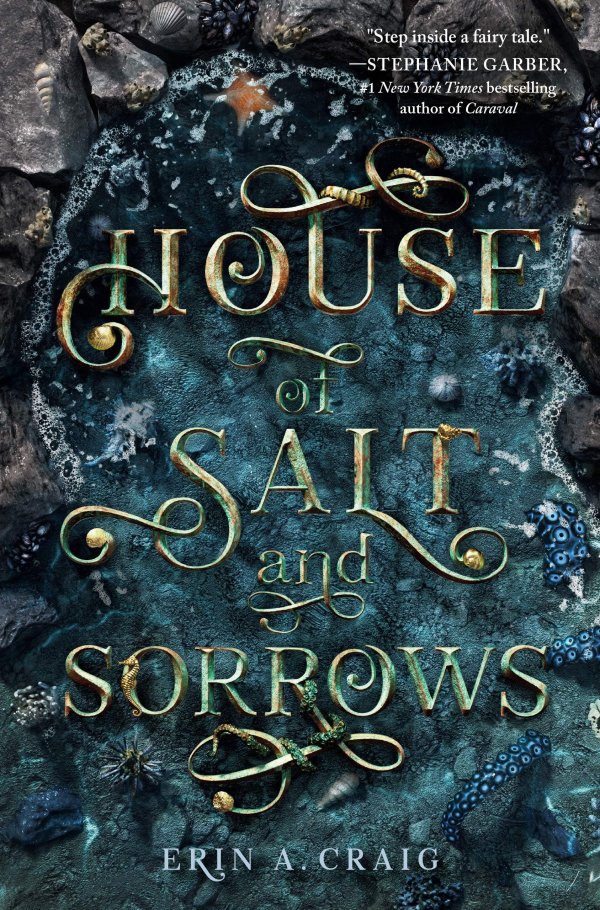 Fairy tale adaptions are a popular subset of YA novels, but not many are based on The Twelve Dancing Princess. However, Erin Craig has taken that lesser known tale and combined it with gothic flavored horror in House of Salt and Sorrows.

Annaleigh lives a sheltered life at Highmoor with her sisters and their father and stepmother. Once there were twelve, but loneliness fills the grand halls now that four of the girls’ lives have been cut short. Each death was more tragic than the last–the plague, a plummeting fall, a drowning, a slippery plunge–and there are whispers throughout the surrounding villages that the family is cursed by the gods.

Disturbed by a series of ghostly visions, Annaleigh becomes increasingly suspicious that her sister’s deaths were no accidents. The girls have been sneaking out every night to attend glittering balls, dancing until dawn in silk gowns and shimmering slippers, and Annaleigh isn’t sure whether to try to stop them or to join their forbidden trysts. Because who–or what–are they really dancing with?

Erin Craig presents an interesting twist on The Twelve Dancing Princesses. There’s a mystery to be solved, but it’s styled less like a hero’s challenge and more like a gothic horror story. Although the puzzle of the worn dancing shoes comes into play, the primary enigma confronting our main character is the deaths of her older sisters.

Annaleigh is the sixth of the Duke of Salaan’s twelve daughters. However, four of the young women have met untimely ends. People whisper that the sisters are cursed, but Annaleigh suspects murder. As her family attempt to ignore the rumors and move on with their lives, Annaleigh investigates the deaths only to find herself increasingly beset by eerie visions and nightmares.

I have mixed feelings about this book. It got off to a fabulous start with Craig’s gorgeous world-building. Arcannia incorporates many Victorian-era elements in its setting and culture, and those who like descriptions of silk ball gowns and corsets and luxurious gaslit estates will have plenty to enjoy. Another Victorian element of the story is the gothic horror type atmosphere haunting Annaleigh. As she confronts one gruesome image after another, readers are left guessing whether her sisters’ ghosts are real or she’s losing her mind.

Then a third of the way through the story, the nighttime balls come into the story along with a magic/meddlesome deity aspect. From the get-go, Arcannia is depicted as a polytheistic society, with each area of the kingdom paying homage to a regional deity. These initial descriptions make it seem like these gods and their supernatural powers are rather removed from the mortal world. However, once the sisters start going to the family shrine, gods and magic are suddenly very active in the narrative.

This irked me. The initial chapters made it seem like the only possible actors in the sisters’ deaths were ghosts or humans. Annaleigh never considers that magic or immortals might be involved even though their existence is supposedly common knowledge. So when the mystery of Annaleigh’s ghoulish visions is revealed as the workings of a god, that was a letdown.

Another weakness of the story is the romance between Cassius and Annaleigh. It’s not insta-romance on her end; watching her figure out whether he’s friend or foe is actually intriguing. However, he walks into the story besotted with her before they’ve met. Considering how he learned about Annaleigh and the fact that she’s one of eight sisters, I’m left wondering why her and not one of the others.

The story also runs into the same quandary I noticed in another Twelve Dancing Princesses retelling, Princess of the Midnight Ball. Basically, twelve sisters is a lot of people to keep track of. Granted, the deaths in House of Salt and Sorrows reduces the number to eight, but that’s still a lot. Aside from the eldest, the youngest, and the main character, the sisters are a muddle of names without much to distinguish them.

However, a woman that does stand out in this female-heavy family is Morella, the Duke’s new young wife. As soon as I saw the word “stepmother,” I really hoped the novel would depict something beyond the hackneyed evil stepmother. Sadly, Morella winds up among the ranks of the wicked version although she puts on a pretty good nice-mom act for most of the book.

This book starts off well and creates wonderful atmosphere in both its radiant and creepy scenes. (And if you want spooky descriptions, there’s plenty on these pages.) However, the deus ex machina resolution to the mystery of Annaleigh’s visions was disappointing, and for the life of me, I don’t see how the main character was so compelling that her love interest would go to such lengths for her.