Manga Review: The Way of the House Husband Vol. #1 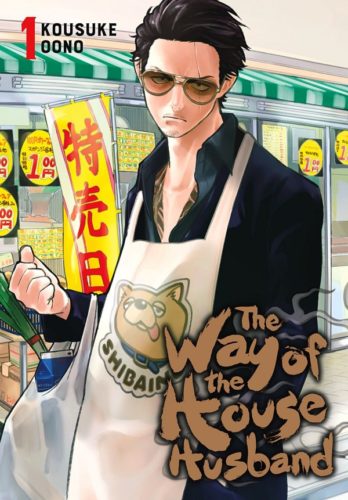 As a manga trope, yakuza tend to be terrifying thugs or comical characters. Tatsu of The Way of the Husband definitely falls in the funny category. Read on for my review of Volume 1.

He was the fiercest member of the yakuza, a man who left countless underworld legends in his wake. They called him “the Immortal Dragon.” But one day he walked away from it all to travel another path — the path of the househusband! The curtain rises on this cozy yakuza comedy!

The cover blurb describes this title as a “cozy yakuza comedy,” but it’s more of a gag manga. As for the main running joke, the cover art for Volume 1 gives readers a pretty good sense of it.

Tatsu was the boss of the Shinzaki yakuza group. He had such a powerful reputation everyone feared him as the “Immortal Dragon.” But one day he left that life to devote himself to the way of the house husband. He’s completely turned over a new leaf! However, you can take a man out of the yakuza, but you cannot entirely take the yakuza out of the man…

The humor from the series stems not from the fact that Tatsu’s flubbing his new role as house husband. Rather he’s killing it. The problem is the ordinary folks around him think he’s killing other things/people as Tatsu strives to make a perfect home for his hard-working career-woman-and-otaku wife Miku and their cat Gin. Because even though his focus is on cooking, cleaning, and bargain-hunting, his look and manner of speaking remain that of a gangster.

As such, the laughs come partly from situations and partly from visuals. For instance, a neighbor asks him to babysit her son, so he does his best to entertain the kid… with gambling games. When he goes out, his garb consists of a flashy suit, sunglasses, and a housewife’s pet-themed apron on top. Oh, and he actually thinks he’s blending in as a normie throughout.

I should mention that the quality of Oono-sensei’s illustrations is excellent and consistent throughout. Everything from settings to clothes to food to the not infrequent brawls Tatsu winds up in is meticulously drawn and easy to follow. A lot of comedy arises from the juxtaposition of Tatsu’s true intentions and the reactions of those around him, and the character expressions do a wonderful job conveying the tension Tatsu causes wherever he goes.

One aspect the series feels lacking, however, is the plotting. The chapters are very short. In Volume 1’s 168 pages, we have nine chapters and three bonus manga. Each chapter is its own standalone story, and they end so quickly they’re more like sketches than stories. There’s no main arc driving the action, and thus far we’ve no backstory on why Tatsu chose to become a house husband or how he and his wife got together. (By the way, although his exit from the yakuza appears to be a relatively recent development, he and his wife are already past the honeymoon phase and give off the been-together-a-while vibe.)

This isn’t to say that the vignettes aren’t entertaining. They are, but if you’re hoping for a deep dive into Tatsu’s psyche or a strong plot, you won’t get it.

One more thing: the text includes no cultural notes. Unless you have an existing knowledge of yakuza and Japanese housewife stereotypes, you may have trouble getting the jokes. I understood most, but there were aspects of Miku’s birthday party that completely went over my head.

Extras include three bonus manga and the creator’s afterword.

A yakuza house husband! The plot doesn’t dig too deep, but Oono-sensei’s excellent illustrations and wacky scenarios are quite funny. Although we get precious little about Tatsu’s backstory, it seems like it would be really interesting, and I hope we get some of that in future installments.