Before she became the mangaka of the hit fantasy series Fullmetal Alchemist, Hiromu Arakawa was a dairy farm girl. Now she brings those country experiences into her series Silver Spoon. Read on for the review of Volume 4. (Reviews of other volumes are available here.)

To take a life. Hachiken will learn how important these words are when raising and living alongside farm animals. As the seasons change and summer becomes fall, he will see what the weight of a life is.

The Pork Bowl arc finally comes to a conclusion—and it’s not a Charlotte’s Web ending. Personally, I prefer it this way. Perhaps Hachiken does agonize overmuch about how farm animals are born just to be slaughtered, but I enjoy his blunt honesty in admitting he can’t go vegetarian became meat is too tasty. Plus, city-slickers like me get to learn and appreciate how much work goes into processing meat as Hachiken turns 50 kilos of Pork Bowl into bacon with his own hands. And just as the pizza party drew the attention (and appetites) of Hachiken’s schoolmates, the smoking of Pork Bowl also brings a crowd. If you enjoy scenes of people feasting, you’re in for a treat. The fun thing is that the impact of Pork Bowl’s bacon goes beyond one day, and the myriad outcomes of having meat at an ag school are a riot.

Having laid Pork Bowl to rest, Silver Spoon wraps up the summer with a two-chapter comedy adventure. It’s a parody mashup of UFO, jailbreak, and war film tropes, but Nishikawa and the other farm boys take their “mission” so seriously that it actually works. It’s a bit strange that they’re so insistent that Hachiken come along, but the mystery of what’s in “Area 51” will keep readers engaged.

Next, autumn gets going in earnest, with third years retiring from clubs, regional baseball playoffs, and preparations for the Ezo Ag Festival. A new season wouldn’t be complete without a new thing for our protagonist to stress over, and Arakawa-sensei delivers it in the form of the vice-presidency of the Equestrian Club and a strange, secretive vibe between Mikage and Komaba. As such, Hachiken has an external challenge to live up to (similar to the pizza party) while his brain goes into overdrive about whether Mikage means more than a friend to him. The latter element might be a common one in high school series, but Arakawa-sensei does a wonderful job putting an ag school comic spin on it.

By the way, for those familiar with the anime, the manga covers the same general territory with minor variations. For this volume, the most prominent difference is the timing of the Area 51 adventure. (In the anime, it took place before summer break).

Extras include story thus far, character profiles, bonus manga, a preview for the next issue, and translation notes.

Overall, this is a fun, well-balanced volume. Vegans probably won’t appreciate Pork Bowl getting turned into bacon, but others will find the popularity Hachiken attains as the owner of 50 kilos of meat hilarious. Then after a UFO sighting/jailbreak parody interlude where Hachiken gets dragged to Ezo’s Area 51, he’s confronted with new club responsibilities and growing feelings for Mikage, all of which lay the groundwork for fresh drama in our next season of high school. 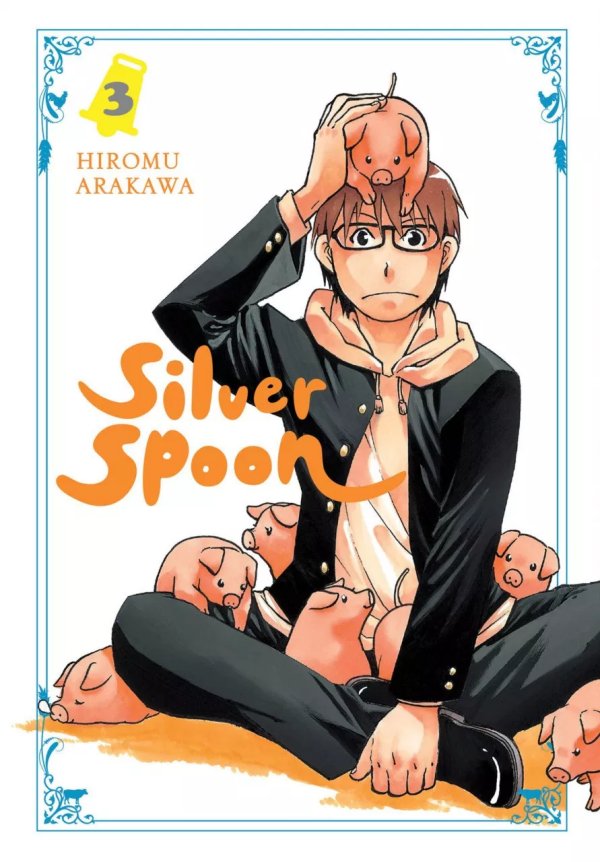 Before she became the mangaka of the hit fantasy series Fullmetal Alchemist, Hiromu Arakawa was a dairy farm girl. Now she brings those country experiences into her series Silver Spoon. Read on for the review of Volume 3!

A few weeks into his summer job at Mikage Ranch, Hachiken has proven himself a hard worker, even under the skeptical gaze of Aki’s father. His first term at Ezo AG has given him a great deal to think about-the future, the fate of Pork Bowl-but open pastures and fresh air provide a very different backdrop to his worries than his previous life in the city. Still, when he chose not to go home for summer break, Hachiken hardly expected home to come to him!

Hachiken’s summer at the Mikage Ranch continues. Our city boy’s sojourn in the countryside continues to deliver a nice combination of laughs and education (Hey, I’m a city slicker, too!), but when he and Mikage talk about dreams and family expectations, the narrative also touches upon the family dynamic that made Hachiken choose not to go home.

Then the story plunges deep into the Hachiken family dynamic when Hachiken’s older brother Shingo bursts unannounced onto the Mikage Ranch. Personality-wise, carefree Shingo is the exact opposite of Hachiken, and his particular talent for ruining food introduces a new running joke into the story. But even though Hachiken bears an intense dislike for his brother, the feeling is not mutual. Rather, Shingo admires what his younger brother is doing and encourages him to do what he wants. Their parents never make an actual appearance in this volume, but the bits of communication that they direct to their sons paint a pretty clear picture why Hachiken wants to get away from them.

Then school resumes, and the story shifts away from the family situation Hachiken’s trying to escape and back to the dilemma he can’t seem to get over: the fate of Pork Bowl. Rather than come to terms with the fact that Pork Bowl was born to be meat, Hachiken gets more tied up in knots now that Pork Bowl is full-grown. Unfortunately, there’s no stopping Pork Bowl’s slaughter date, and when it’s finally staring Hachiken in the face, he makes a surprising proposal. I love this part of the story, how Hachiken has become so acutely aware of the animal lives that make meat possible and how that pushes him to acknowledge those lives the best way he can. Vegetarians probably won’t be too happy with his decision, but as another person who can’t become a vegetarian, I really enjoyed it.

For those who have seen the anime, the manga and TV series share the same major scenes and general timeline. However, there are a number of small scenes in the manga that were not included in the anime, and the last-minute fattening of Pork Bowl in the anime was not part of the manga.

Summer vacation arcs often mean fun outings with friends, trips to the beach, swimsuits, and festivals. But that’s not the case for Hachiken. While he does manage to attend a festival, his summer is marked by more unpleasant incidents in the countryside and unwanted visits from his free-spirited older brother. As usual, Arakawa-sensei does an excellent job balancing the comedy of Hachiken’s city boy bungling and his angst over the fate of Pork Bowl and other farm animals.