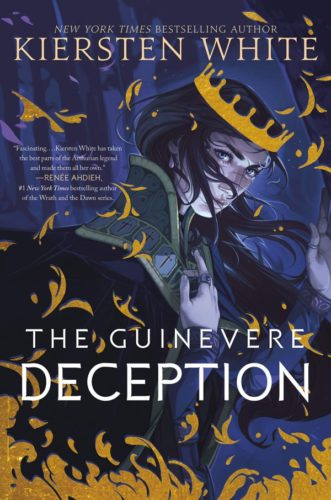 A lot of retellings recast females in much more active roles than they originally had. Kiersten White does this with the Arthurian legends in The Guinevere Deception. Read on for the review.

Princess Guinevere has come to Camelot to wed a stranger: the charismatic King Arthur. With magic clawing at the kingdom’s borders, the great wizard Merlin conjured a solution–send in Guinevere to be Arthur’s wife . . . and his protector from those who want to see the young king’s idyllic city fail. The catch? Guinevere’s real name–and her true identity–is a secret. She is a changeling, a girl who has given up everything to protect Camelot.

To keep Arthur safe, Guinevere must navigate a court in which the old–including Arthur’s own family–demand things continue as they have been, and the new–those drawn by the dream of Camelot–fight for a better way to live. And always, in the green hearts of forests and the black depths of lakes, magic lies in wait to reclaim the land.

Deadly jousts, duplicitous knights, and forbidden romances are nothing compared to the greatest threat of all: the girl with the long black hair, riding on horseback through the dark woods toward Arthur. Because when your whole existence is a lie, how can you trust even yourself?

The Guinevere Deception seems written for those looking for a feminist take on the Arthurian legends. Arthur’s queen isn’t your usual pretty trophy wife. She’s clever, she takes initiative, and her mission is to protect the king. But she’s not the only strong female in the cast. Most women boast backbone plus some power or ability, and the two greatest threats to our protagonist are female.

As to the main character, she’s called Guinevere, but the third person narrative initially only refers to her as “the girl,” which makes for a clunky opening chapter. It’s not until the middle of Chapter 2 that it settles on referring to her as Guinevere. That’s because “Guinevere” is a changeling and only recently assumed this particular form and identity (which was taken from a now-deceased princess). This is done at the behest of her father Merlin. Having convinced King Arthur to ban magic from his realm, the great wizard is obliged to stay out of Camelot. But so that Arthur’s not left completely vulnerable against dark magic, he sends his daughter to watch over the king in his stead, and their marriage is a ruse to allow her to keep close to Arthur.

It’s a complicated setup. It’s also complicated because our main character has big gaps in her memory, which makes it difficult to tell what kind of person she was before assuming her Guinevere identity. For instance, Merlin is her father, but she knows nothing about her mother, and it doesn’t strike her as strange until two thirds through the book. At the same time, she’s faking her way as queen without any real guidance on who the real Guinevere was. The only thing that is absolutely clear about her is that she is determined to protect King Arthur no matter what.

Her loyalty is admirable, but it is also baffling, given that she dedicates herself to the task before she’s met Arthur. Moreover, she’s a creature of magic who’s been isolated from people. Prior to becoming Guinevere, she lived in the wilds, and her only interactions were with Merlin. She doesn’t have any real investment or connection with human society, yet she’s ready to put herself on the line to make sure Arthur’s vision for Camelot succeeds.

However, if you can accept that elaborate setup, the plot that follows is interesting. Guinevere must use magic to detect and fight magic, but because it’s against the law, there are close calls and clandestine measures. Guinevere ends up behaving like the superhero who must wield her superpowers judiciously in order not to blow her cover. Arthur, who contrived the arrangement with Merlin, knows her secret, of course, but eventually she let others in on it, mainly because she holds an equally weighty secret of theirs.

Regarding Guinevere’s relationship with Arthur, this novel is YA, so they get around the issue of sex by agreeing that their marriage is just a cover and therefore does not need to be consummated. However, Guinevere, who devoted herself to Arthur even before laying eyes on him, pretty much falls for him once they actually do meet. Although that’s not too surprising because everyone in Camelot is in love with the king. While female characters have a fair amount of complexity, the male characters are flat. That includes Arthur, who’s invariably adored by his people and always does the right thing no matter what. The one exception to the banal male lineup is Arthur’s nephew Mordred, who forms a love triangle with Arthur and Guinevere. His interactions with Guinevere are much more interesting, although they have so many encounters that it’s a wonder it doesn’t trigger any malicious gossip in the court that Guinevere trying to navigate as queen.

The multifaceted aspects of this world are the novel’s strong suit. Guinevere’s acting sentinel against magical forces, so there are battles and investigations involving enchantment. At the same time, she’s queen at a castle, so there’s an element of royal pageantry. And Camelot doesn’t exist in a political void, so Arthur has human enemies in addition to the supernatural ones. Plus, a kingdom has more mundane problems, like poop disposal. This envisioning of Camelot is lively and fascinating, so even if our heroine is sometimes baffling as she sorts through the disconnected bits that comprise her identity, the activity swirling around her form an engaging backdrop.

This Guinevere isn’t just a pretty face. She’s a magic-wielding, smart-sleuthing protectress of the kingdom. However, the fact that she doesn’t remember much of who she is while simultaneously impersonating a person she never knew makes her someone difficult to relate to. But if you like mysteries and enigmas with a cast of knights and various magic-wielding entities, give this book a shot.