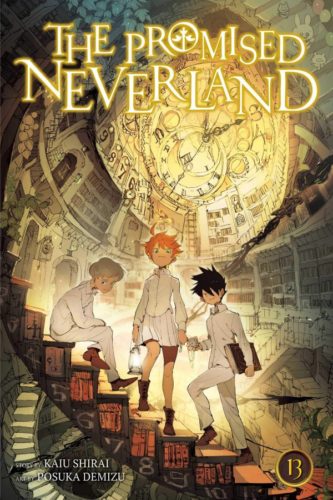 The Promised Neverland anime was a surprise favorite of mine for 2019. Its blend of mystery, suspense, and heart grabbed my attention and wouldn’t let go. For English-speaking fans who can’t wait to see what happens to Emma and their friends, they can read ahead in Viz’s translation of the manga. Read on for my review of Volume 13. (For reviews of other volumes, click here.)

Emma, Ray and their large new family find themselves up against a new enemy, fellow humans. Armed intruders have ambushed the shelter and driven the children back out into the dangerous wilderness. Yugo and Lucas have stepped up to fight, but will it be enough?

The previous volume had a few events happening over a long period of time. This volume has a ton of stuff happening over just a few days. It begins with the conclusion of the shelter invasion. It’s edge of your seat action as Yugo and Lucas launch their counterattack, and interspersed amid the gunfire are glimpses of their Glory Bell childhood. Then when the battle reaches its explosive conclusion, we get a lengthy flashback and Yugo’s reflections on his life. Especially when Yugo was first introduced, he was a difficult character to figure out, but Chapter 109 lays bare his candid thoughts. Is it heartrending? Yes. Did I cry? Oh yes.

The narrative then shifts to the kids who have gone into hiding. Bereft of the adults’ protection and stripped of their home, their predicament seems overwhelming until Oliver reveals the message that came through the shelter phone right before the attack. Astoundingly it’s from William Minerva – or at least someone claiming to be him. The message gives them new hope and a new destination to journey toward.

Unfortunately, they haven’t even a chance to act on this new information when Andrew, the head of the raid, pounces on them. Considering he got hit by a blast underground, his survival challenges the limits of plausibility. At any rate, the scene serves the purpose of forcing the kids through yet another nightmarish struggle (and Andrew does look ghoulish) before they escape the area for good.

The story then introduces several new characters. As it turns out, the Minerva faction is alive and active. In fact, they’ve been extremely active during the months Emma and company were scouting out the Seven Walls. Whereas before it seemed the escapees were striving for a new promise on their own, now it looks like they’re part of a larger movement. The fact that two of the new characters bear tattoos of the facility Norman got moved to makes me hopeful that he’ll be reunited with Ray and Emma soon.

Extras include side scenes and the creators’ notes.

Whereas Volume 12 was slower paced, Volume 13 is never a dull moment. In addition to an emotional roller coaster that goes from heart-stopping to heart-wrenching and back again, the plot thickens with a new message from William Minerva. The kids aren’t the only ones out to change the world, and I look forward to seeing the repercussions of the Minerva faction’s drastic actions.

The Promised Neverland anime was a surprise favorite of mine for 2019. Its blend of mystery, suspense, and heart grabbed my attention and wouldn’t let go. For English-speaking fans who can’t wait to see what happens to Emma and their friends, they can read ahead in Viz’s translation of the manga. Read on for my review of Volume 12.

Life at Grace Field House is good for Emma and her fellow orphans. While the daily studying and exams they have to take are tough, their loving caretaker provides them with delicious food and plenty of playtime. But perhaps not everything is as it seems…

With the demons of Goldy Pond finally defeated, Emma and the other children now focus on their next task—finding the Seven Walls. But it won’t be easy, especially with a dangerous new foe trying to hunt them down. Can Emma and Ray decrypt the ancient clues that will lead the children to true freedom?

The Goldy Pond arc went out with a literal bang, with bullets flying and the whole place blowing up. Now that the kids plus two adults are safely at the B06-32 shelter, the gears switch away from action to sleuthing and intrigue.

The mystery is twofold. First is the situation between the Minerva group and the Ratri Clan members that shut them down. The kids have extremely limited access to information on the human world, so they’re stuck making conjectures on what the actual situation is. Thing is, the Ratri Clan is also conjecturing about the escapees and their whereabouts. The creators do an excellent job keeping readers on the edge of their seats as Peter Ratri and his terrifying minion Andrew strive to sniff them out.

The second mystery is the Seven Walls, which they must locate if they want to attempt a new promise regarding the humans in the demon world. This starts off a lot like the trail of clues at Grace Field House, but then it takes a great leap in scope. The search involves distances that require months to cover. What this does is force a rapid progression of time; the events of Volume 12 span over a year and a half. As a result, the kids are pushed right up against their deadline to return for Phil and the remaining Grace Field kids by the end of the volume.

Another leap is that the Seven Walls investigation takes on a mystical aspect. Whereas before they obtained clues from those they encountered or gleaned them from books and objects, this time Emma gets overtaken by a vision. I wasn’t expecting the series to take a turn for the supernatural. Then again, elevators supposedly connect human and demon worlds, so why not?

After several chapters of furtive investigations, things get charged up again when Peter Ratri’s thugs invade the B06-32 shelter! It’s a compressed, more intense version of the battle at Goldy Pond. Once more, the kids get pushed to the brink, except this time their pursuers are other humans.

Extras include side scenes and the creators’ notes.

Fans of the clue-tracking aspect of this series will enjoy the kids’ search for the Seven Walls. It’s a long investigation–over a year and a half! But the creators do a good job presenting events such that the pacing doesn’t get bogged down. Then it’s back to action and thrills when the Ratri Clan invades the shelter!